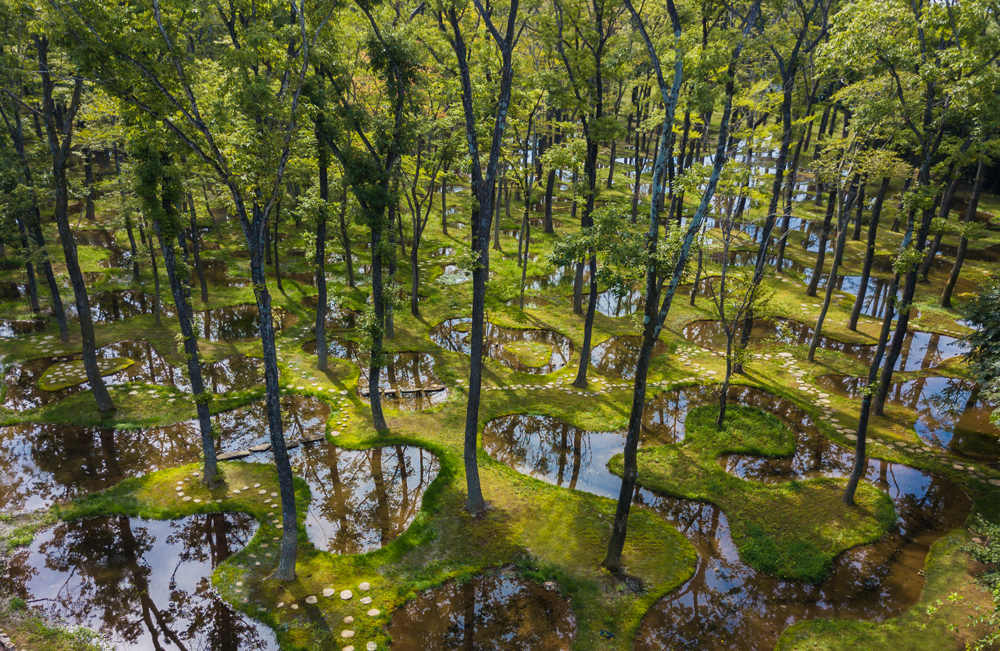 The work before you will surely surprise you, too. Its creator is Junya Ishigami, a Japanese architect, who received the 2019 Obel Award for this work. The representative of the Danish Foundation that awards the prize, Martha Schwartz, described the work as “architecture of space, not of an object, functioning in accordance with architectural conventions. He discards the idea of architecture as a built, utilitarian structure by reversing the business-as-usual process, which is: building first, landscape second – if at all. Ishigami leaves us wondering: is this architecture, landscape architecture, or art? We consider the project an atmospheric and spatial experience… His ability build on an emotional foundation is missing from most architectural products today. Junya revealed the flow of our feelings towards the environment to us, he launched a new way of looking at architecture, and I believe that he is making a significant contribution to the field of architecture. His work is a great inspiration, as he tells us anew what our world is.”

Because Ishigami’s work is mediated for us through images and photographs, it is worth consider the perspectives of the Obel Award jury.

“The project transmits a very strong message through the story it tells about the ways of nature. It is a created, artificial space. On the one hand, it is very technological, but on the other hand, very poetic. Before visiting the site, I studied the plans carefully and examined photographs, but I must admit that seeing the work in situ was entirely different from what I saw in the photographs. For me, visiting the place was a great moment in architecture, something I rarely see as an architect.” Louis Becker

“Ishigami’s beautiful forest is extremely interesting in its desire to design something that is artificial, but in the end something completely natural… The forest is like a new invention, which triggers emotions. The work relates to space and nature. This is a whole space of beauty” Kjetil Trædal Thorsen

“Ishigami shows how space, belonging as it does to nature, is valuable in itself. This is a very important philosophical concept. Nature cannot speak for itself, but we can and must speak for it.” Wilhelm Vossenkuhl

To locate the site of Ishigami’s work, note the following detailed description. The Bio Top Water Garden work is located in the Tochigi prefecture, approximately 99 km north of Tokyo, as the crow flies. It is within Nikko National Park, which also includes a coniferous forest, the volcanic Mt. Natal, and Lake Chuzenji, which was formed by a volcanic eruption. East of the lake are the Kegon Falls. Hotels in the area have hot springs, with pools both open in nature and enclosed buildings. The famous Tosho-gu temple is located in the western part of Tochigi.

“Ishigami’s approach relies in large part on emotions and sensations and is based on the context and the qualities of the landscape. The result is a landscape full of beauty and atmosphere – a highly poetic space that strongly influences the emotions of the visitor” (from the Jury’s Statement).

Who is Junya Ishigami? Born in Japan in 1974, he was educated at Tokyo University of the Arts. He began working as an architect in the famous firm Sanaa, before founding his own firm in 2004. He stood out for his originality from the beginning of his career and received several awards. “I wish to think about architecture freely; to expand my perspective on architecture as flexibly, broadly, and subtly as possible, beyond the stereotypes of what architecture is considered to be.  As architects we need to listen with care and humbleness to the voices of all the people on this earth who are in need of architecture. To create in a world where the styles, categories, mundane and familiar exist but we also reconsider and refresh as if all the concepts of architecture were nonexistent.

People who live in different regions and cultures with different religions and history obviously have different values. The role of architects in the 21st century is to suggest infinite ways for architecture to correspond to the infinite values of many people around the world.”

The Art Biotop Water Garden functions as an extension of Art Biotop Nasu, a resort that offers courses in poetry, pottery, glassmaking, and other art activities.

Ishigami created the Water Garden on the site of a rice paddy that had previously been a moss-covered forest, while hotel site was formerly a forest. To construct the hotel, many trees were felled. Ishigami proposed moving an entire forest to a nearby meadow. It is as if he reconstructed the existing forest and the water channels of the rice paddy to create the pools. The trees, the pools and the moss that joins them reveal nature that has grown, but was not previously seen at this site.

There is no doubt that Junya Ishigami stretched the boundaries of architecture in this extraordinary project, which touches on both art and tourism, enabling a bi-directional dialogue between nature and humanity, one that successfully arouses exhilarating aesthetic feelings.

This year Junya Ishigami constructed another extraordinary project at the Serpentine Gallery in London, which expresses his relationship with ancient cultures. To learn more about it, you are invited to view this video. https://www.youtube.com/watch?v=W3senDgiHKM