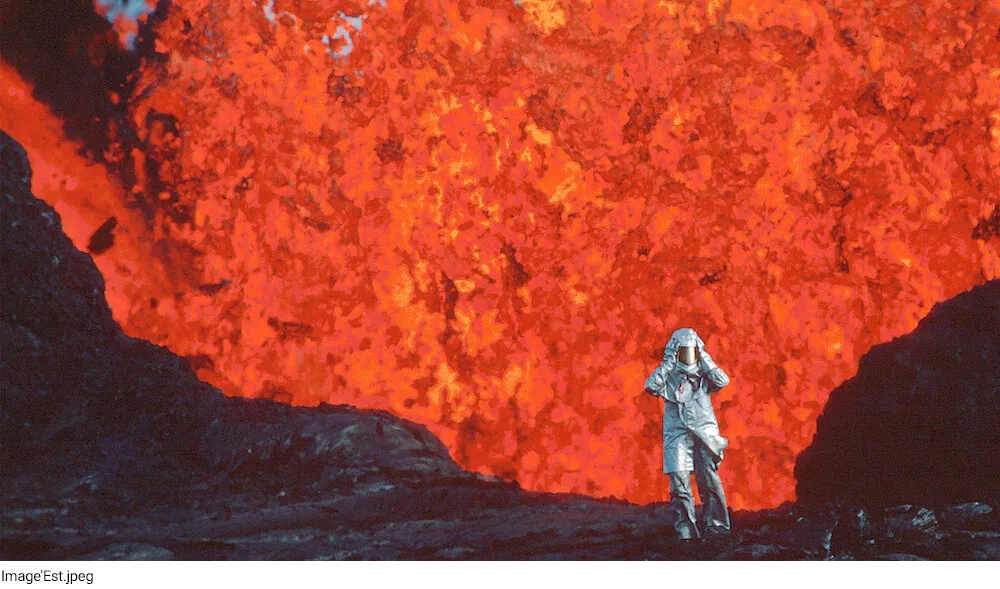 Katia and Maurice Krafft were a French couple who studied volcanoes in Iceland, Hawaii, Zaire, Italy, Colombia and Japan all their lives. What made them tick? Katya studied chemistry and physics at the University of Strasbourg, and Maurice studied geology. They met as students. Maurice first discovered his love for volcanoes at the age of seven, on a family trip to Naples and Stromboli; at 15 he was already a member of the Geological Society of France.

Katya was born in 1942 and Maurice in 1946. They married in 1970, and decided “not to have children in this world.” Their entire life was devoted to the study of volcanoes around the world. Their research was compounded by another love, for a natural phenomenon, namely – volcanic eruptions.

This prompted the Kraffts to photograph extraordinary sights with astonishing intensity! Lava streams, ash clouds and mud slides are the subjects of the spectacular, amazingly “live” photo archive they left behind. The couple walked together into great dangers, at least that’s what the pictures looks like to viewers, watching from the side. Katya and Maurice thought differently. The physical proximity, encountering volcano craters eye-to-eye, touching the rushing and moving lava, evoked great excitement in them. They would speak of “listening to the heartbeat of the earth.”

In 1991, Katya and Maurice, not yet 50-years-old, were found dead in Japan, caught by a pyroclastic flow on Mount Unzen, in an eruption that surprised even experienced researchers like themselves.

Early in their career, the Kraffts realized that many people were interested in their photographs and movies documenting volcanos around the world, a natural phenomenon that is threatening and enchanting at one and the same time. Thus, they were able to finance their travels around the globe. Katya also wrote books about her findings, including about how new volcanoes are formed.

Dear readers, watch a sample from the film:

What actually occurred in June 1991, while Katya and Maurice were filming the eruption of the Mount Unzen in Japan? In the course of the eruption, there occurred an occasional phenomenon known as a “pyroclastic flow, in which the mountain releases extremely hot gases in the form of a huge cloud that rises and continues rolling faster than a person can run or a car can drive. The flow enveloped the Kraffts and another 41 other people, including a fellow researcher, journalists and emergency rescue teams. The video below illustrates the phenomenon, as captured by a film crew at the foot of the mountain.

The film Fire of Love presents a picture of the vast power and position of nature vis-a-vis human beings, sometimes painful and sometimes joyful.

Extensive archival footage was collected by Sara Dosa. See an interview with her here:

Source of the movie: National Geographic. The movie premiered in January 2022, at the Sundance Festival in New York.

The trailer may been seen here: