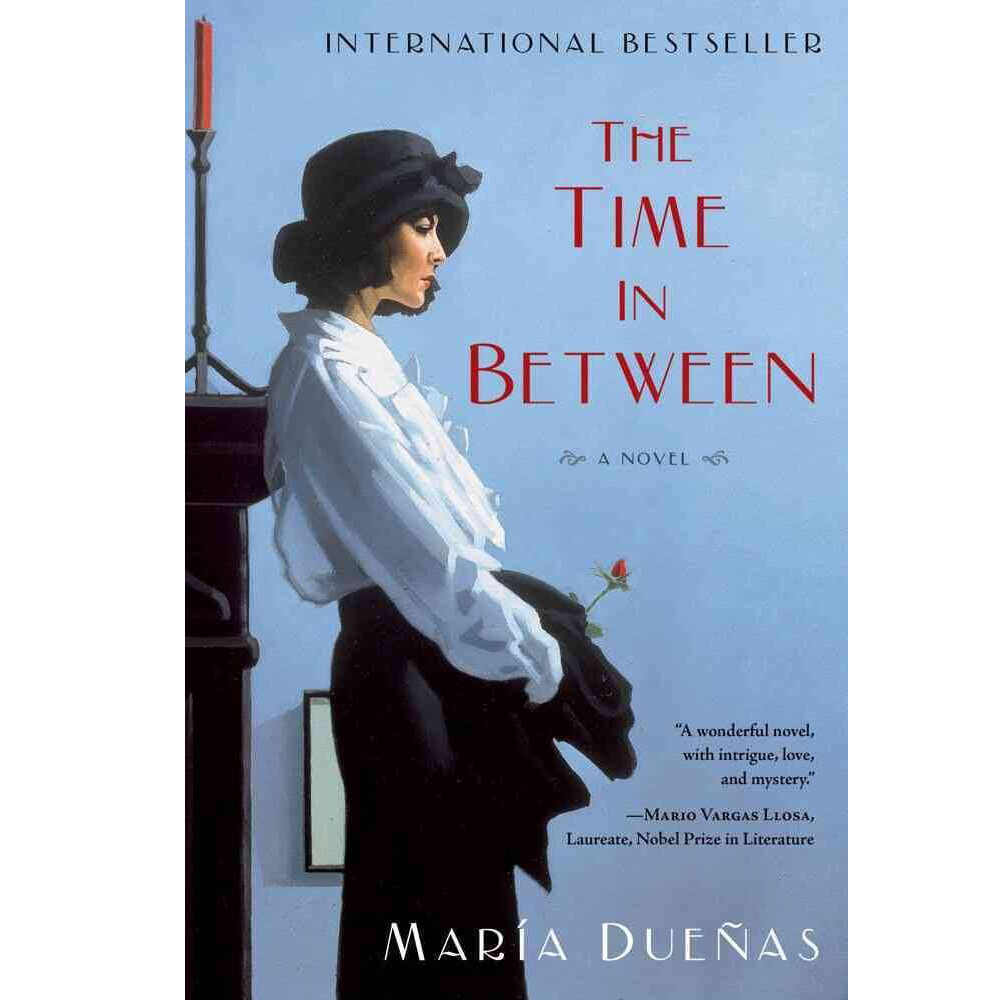 We all tell stories to each other – all day, every day. That is how we join one event to another, raise characters up and bring them down, mark times and places. María Dueña, a Spanish writer, has brought life stories together a beautiful book, locating them in the period extending from approximately 1920 until a few years after World War II.

We all love stories, especially if they are “painted” by a superbly-talented writer. For the few days I was reading The Time in Between, I knew that it was captivating – crucial, earth-shaking historical events, and the cumulative tension created when characters have large question marks hovering over their heads: would they be able to navigate their daily lives?

María Dueña, an historian with broad knowledge of Spanish and world literature has, with great success, met the challenge of bringing to life a range of varied characters. Using descriptions, dialogue and dramatic occurrences, she introduces her readers not only to Spaniards living their daily lives, but also to Englishmen, Germans, Moroccans from very diverse backgrounds; there are  assorted European aristocrats, diplomats, government officials of every rank, the wives of…, servants and one key figure – Sira Quiroga – a brilliant literary invention. She is beautiful, common-born Spanish seamstress around whose beauty and profession, Dueña pulls together the threads of many fascinating tales. Reverberations from turbulent events in Europe at the time propel the plot and heighten the tension.

The book allows the reader to live in the extraordinary reality of the years before and during World War II. “Live in the reality” is not an exaggeration. Rather, the detail and richness of the characters and their variety, the authentic dialogues and skillful writing truly to breathe life into events, as if they had just happened.

The primary distinction of the book is undoubtedly the superb writing. With great talent and without artifice, María Dueñas makes us, as readers, feel that we have just met the characters and are present at events occurring in Spain and Spanish Morocco, witnessing the tangible images that take shape before our eyes. María Dueñas reveal the depths of personal, social, economic and political conduct in the very intense relationships between characters who meet despite their foreignness – Englishmen, Germans, Moroccan Arabs, and Spaniards.

The flow that is created between such diverse human sectors – when tension is the thread holding the entire narrative together – exists only because of the author’s admirable literary talent. The authenticity of the stories is maintained throughout the book thanks to María Dueñas’ knowledge, primarily of European history, and the integration of flesh and blood figures from the relevant period, in attire tailored to her novel and the surrounding political changes.

As for my parents, there might have been several endings to their story. In one possibility, Gonzalo Alvarado [the main protagonist’s father] travels to Tétouan [Spanish Morocco] and seeks out Dolores [Sira’s mother]. He proposes that she return to Madrid with him and they make up for lost time, never again to be separated. In another, entirely different ending, my father never leaves the capital while my mother meets a quiet military man in Tétouan; a widower who falls madly in love with her like a teenager, and pens passionate love letters. What of Marcus [Sira’s Scottish lover]? Perhaps our paths parted when the war ended. Conceivably, after our four years of tumultuous love, he returned to his country and I lived out my life in Madrid, becoming a prestigious seamstress, and managing a legendary studio accessible only to a limited circle of clients…. Our destinies might have gone in any direction, as our lives left no mark on anything. It is even conceivable that we never existed.

Photograph of Tétouan in Spanish Morocco (a Spanish protectorate at the time).

The quotation above it appears close to the end of the book in the self-reflective epilogue of the Hebrew version. The novel itself does not include any such tricky writing. María Dueñas succeeds in drawing the reader into the sequence of events and descriptions of the characters who live life as it happens. At the end of the book, she addresses readers and shares reflections on destiny and what is always possible in all our lives. These reflections hone Dueñas’ sensitivity to the story she has depicted, brought together to expose human activity in one of the most distressing periods in European history.

At times, it seems that each paragraph is a surprise, primarily due to the unobtrusive, sometimes amusing, writing that pulls the characters’ threads to follow new atmospheric paths that Dueñas is fashioning. This aspect of her writing keeps readers from putting the book down, their curiosity never abates.

In the last chapter – Author’s Notes – the identity of several characters who appear in the book is revealed, together with the names of others who inspired the text’s imaginative tapestry. Consider that even in the last chapter, after more than 750 pages, the author manages to captivate the reader by exposing the characters’ lives outside the book.

For providing me with firsthand information about Alan Hillgarth, the British Secret Services in Spain, and the Embassy cover, I’d like to acknowledge the personal kindness of Patricia Martínez de Vicente, author of Embassy, or the Mambrú Intelligence, and the daughter of an active participant in those clandestine operations (p. 755).

There is no doubt that Maria Dueñas is well acquainted with the historical sources. Therefore, the foundation stones underpinning the novel’s stories are highly credible. The quotation above also reveals one aspect of the novel in which tense spy stories continue almost until the end of the book.

The Time in Between is an extraordinary work that has characteristics of a romantic, even fiery, telenovela fed by historical events or cultural changes reflected in the smallest details, as well as high-tension tales of espionage. Dueñas’ talent allows the reader to grasp the empathetic images, feel the extreme, mixed emotions, in the context of major historical events that confounded the world before, during and after World War II. “I was proud to know that I was able to add my grain of sand to make our crazy world a better world. I was proud of the woman I became” (p. 735). The butterfly effect in the form of one grain of sand, as formulated by the book’s protagonist.

The simple genius Maria Dueñas’ prose is evident in translation as well. Notice the bright flow of period features:

The years went by, life went by. Fashion changed, too, and at its command the activities of the workshop adjusted. After the war in Europe straight lines had arrived, corsets had been cast aside, and legs began to be shown without so much as the slightest blush. When the Roaring Twenties came to an end, however, the waistlines of dresses returned to their natural place, skirts got longer, and modesty once again imposed itself on sleeves, necklines, and desires. Then we launched ourselves into a new decade and there were more changes. All of them together, unforeseen, almost one on top of another. I turned twenty, the Republic arrived in Spain, and I met Ignacio. It was one September Sunday in Parque de la Bombilla, at a riotous dance that was crammed full with workshop girls, bad students, and soldiers on leave. He asked me to dance, he made me laugh. Two weeks later we began to sketch out plans to marry.

Not by chance does this article quote excerpts from both the beginning and end of The Time in Between. Rather, it is out of a desire to demonstrate to our readers the great interest to be found throughout this most enjoyable book.