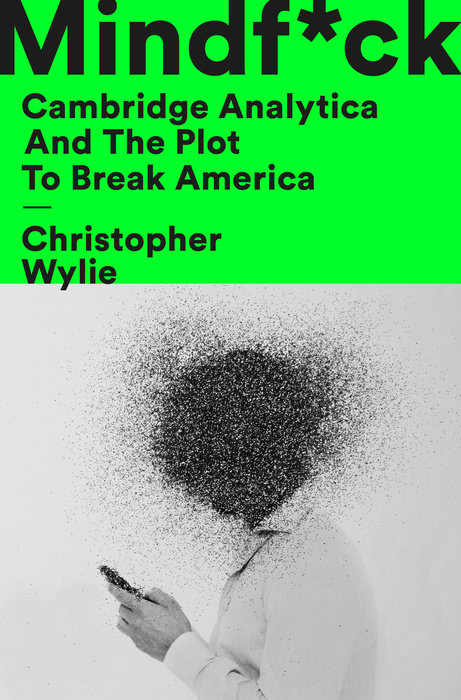 “I chose to come here of my own accord and to answer these questions about how a liberal, gay twenty-four-year-old Canadian found himself part of a British military contractor developing psychological warfare tools for the American alt-right.” Thus begins a Christopher Wylie’s fascinating book! “Fresh out of university, I had taken a job at a London firm called SCL Group, which was supplying the U.K. Ministry of Defense and NATO armies with expertise in information operations.

After Western militaries were grappling with how to tackle radicalization online, the firm wanted me to help build a team of data scientists to create new tools to identify and combat extremism online. It was fascinating, challenging, and exciting all at once. We were about to break new ground for the cyber defenses of Britain, America, and their allies and confront bubbling insurgencies of radical extremism with data, algorithms, and targeted narratives online.

But through a chain of events that unfolded in 2014, a billionaire acquired our project in order to build his own radicalized insurgency in America. Cambridge Analytica, a company few had ever heard of, a company that weaponized research in psychological profiling, managed to turn the world upside down.”

This long introduction is intended to help the reader understand the incomparably sophisticated operation that controlled 84 million social media profiles, of live human beings, almost as if they were marionettes dancing on an invisible thread. With the paragraphs above, begins the saga of how even a brilliant guy like Christopher Wylie could be sucked into the den of Cambridge Analytics, almost as Alice was drawn into Wonderland (or Through the Looking Glass). The most interesting parts of the book are the goals, means and methods; in short, how innocent people like Wylie participated in unprecedented manipulations with the help of contemporary digital technology.

I will attempt, using all the means at my disposal, to convince you, the readers, that it is the duty of every citizen of the world to read this book. We now live in an age when many previous assumptions have been upended, and this book reveals deeply concealed conduct that connects continents – North America, Europe and Russia – and also influences local affairs in other countries, in Africa and the Orient.

Most importantly: the writing is better than interesting; it is fascinating and sweeps the reader away, almost like an excellent thriller. The author Christopher Wylie is not only a digital technology genius; he knows how to explain topics and realities that are unfamiliar to most readers in a conversational style, almost as if he and the reader are in a room together.

The exposures are extraordinary: ranging from descriptions of the conduct of respected academic scientists to that of greedy scam artists and personalities with sinister goals that seem almost imaginary.

Christopher Wylie wrote this book because it was important for him to reveal how, in the contemporary era of hunters and hunted, the vast majority of actors are initially sucked into to doing what they do without any awareness of the potential consequences. Then, the adrenaline rush from the work itself does the trick of keeping them inside.

The book is written so that even the lay reader finds himself negotiating the labyrinth into which Wylie was sucked. This is undoubtedly a literary virtue.

“I could not continue working on something so corrosive to our societies, so I blew the whistle, reported the whole thing to the authorities, and worked with journalists to warn the public about what was going on. Sitting before this panel, jet-lagged from a transatlantic flight the day before, I still cannot help but feel on the spot as the questions grow more pointed. But several times, my attempts to explain the intricacies of the company’s operations leave everyone with puzzled faces, so I simply pull out a binder and slide it to the congressmen. What the hell, I think. I’ve come this far, so I might as well give them everything I have with me. There is no break, and the door behind me remains closed the entire time. I’m locked in a stuffy, windowless room deep underground, with nowhere to look except straight into the eyes of these members of Congress as they all try to figure out what the hell just happened to their country.”

This extended quotation reveals the greatness of Wylie’s ability to captivate readers with passages that flow naturally, beginning with the physical events in Congress, in the interrogation room, in a manner similar to how a person tells another about events he has experienced him. Wylie reveals his reflections-thoughts, physical sensations, and describes the faces of the astonished members of Congress. I chose to emphasize the words bolded in the quotation above to highlight the natural transitions in Wylie’s writing. Undoubtedly, his literary talent is evident in the tension he creates and develops through word selection and in the texture of the sentences that flow from one to the next. To our surprise, we can indeed understand everything that is written and narrated with ease.

In the story of how Cambridge Analytics came to be, perhaps it is most shocking point is that its creation was approved in name of 84 million living people whose profiles appear on social media, primarily Facebook. You ask: how could this be possible? The book answers that “scientific” sophistication not only can and but successfully has achieved that goal. Wylie reveals the process step- by-step, and the reader is left stunned by the discovery revealed in black ink on white paper.

At this point, it is important to note that Wylie worked in Canada in his youth, and was then invited to the US – even before finishing college – to help certain political parties analyze their target audience, thanks to his unique talents. After these jobs, Wylie decided to study law in London. After completing law school, he understood that it would be important to study fashion as an academic discipline. He understood that being familiar how changes in fashion occur and their effects, is significant for understanding something about human beings. Great wisdom.

(Personal note: Could someone explain why many people choose to wear jeans with tears/holes and pay a lot of money in luxury stores for them? How are aesthetics “cut to pieces” even by those who understand more than a little about aesthetics and its contribution?)

Another important detail, people in Silicon Valley – unlike the rest of us ordinary people – were not shocked by these details and the familiar methods used for breaking profiles down into the component parts. Advanced digital technology often uses such methods to expose and be exposed to the possibilities for commercializing a wide-range of topics.

An important caveat: technology is not to blame for the dark goals; obviously, it is merely a means. It is a person or people, their intelligence, their “conspiracies” – which can be positive or destructive, depending on the psyche of those pulling the strings.

And when the work was in progress:

“Imagine  the power, Kogan told me, of a database that linked up a person’s live digital behavior with a database of genes. Kogan was excited – with genetic data, we could run powerful experiments unpacking the nature-vs-nurture debate. We knew we were on the cusp of something big.”

The story of Wylie’s childhood and adolescence is no less exciting. Why do I mention this? Because it must be said, but primarily to tempt you into reading the book by noting almost every paragraph will draw you into the fascinating world of the Mindf*ck that Christopher Wylie recounts.

This book should not be read – just sample a few pages and take a rest. Why? Because of the tension, the stormy reaction to reading it, and especially because of the unbelievable revelations – truth that is stranger than fiction – but which actually happened.

Watch a video of Christopher Wylie appearing before the U.S. Senate. Fascinating.