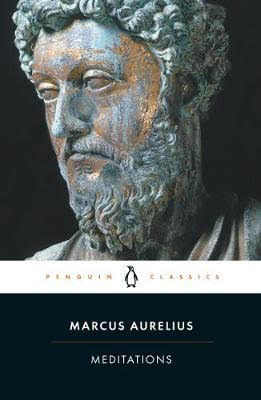 Once you purchase the book Thoughts To Myself, I am almost convinced you’ll be grateful for the recommendation. The book is, in fact, a diary, the thoughts of a wise, humble man, with wide application to our lives as human beings. This person—a Roman emperor, from the second century CE (121-180 CE)—is Marcus Aurelius. The book is a document of one extraordinary person’s thoughts. Open it to any page you choose, and you can meditate on the view to beseen through the writer’s words.

“The Roman emperor and philosopher (Marcus Aurelius), was one of the most enlightened rulers in human history. His outlook was influenced by the writings of the  *Stoic philosophers

who preceded him . . . at the same he was managing the affairs of state and the wars that shook the empire, Aurelius wrote down his thoughts – probably in the last decade of his life . . . Marcus did not intend for his composition to be published. It seems that it was a coincidence that his writings were preserved and have reached us.” (According to Abraham Arouetty’s afterword).

The book contains an impressive variety of thoughts, reflections, and ruminations – in what follows we have chosen to present to you a number of thoughts from a number of different perspectives.

Aroati, translator of the book and illustrator of Marcus Aurelius’ outlook, states, “Behold, yes, man and the universe are one; the same elements make up both the universe and man and all the processes of change that sustain the world, exist in man and sustain him.”

From the rather intriguing beginning of the book, “What did I learn from my ancestors?”

In conduct among people, it is fundamental  – good morals and even temperament; for success in life, modesty is important for a person – pay attention: modesty first, and heroism after. If we succeed in educating ourselves and our children in light of these emphases, consider how well we can succeed to do with our lives and the lives of us all.

(10) It may be said that the events of reality are under such a veil and so hidden from the eye, that for many important philosophers they cannot be grasped; even in the eyes of the Stoics themselves they seem difficult to grasp. All our agreement on the impressions of reality is subject to change – (p. 71)

When I finished writing the above lines, I smiled to myself – the story of the coronavirus, and other small and big stories in the lives of all of us . . . indeed “there is no end to the unknown,” as one of my friends said to me a few days ago. What is hidden from the eye is both the difficulty but also the magic in all of our lives. Sometimes only with years of hindsight do we realize why the bumps in our lives, or the pleasant surprises of our lives have happened to us, and sometimes even then they continue to wear the veil of secrecy.

(9) Do not tire of your soul, do not despair and do not be impatient if you do not succeed in establishing all your deeds religiously and lawfully according to the principles of righteousness and right. Not so, but after your defeat you will rejoice again, if the bulk of your deeds are worthy of a human being. Love the thing to which you will return – do not return to the bosom of philosophy as a return to a strict teacher, but like those whose burning eyes return to the sponge and the healing ointment, or as another will ask for a bandage or a balm. In this way you will prove that obeying the voice of reason is a trifle; not so though – you will find it relaxing . . . (p. 70)

Aurelius aides the reader like a pair of crutches:

Is likely to stand at our side.

(3) Three are your components: body, spirit, mind. Your first two will last as long as it is your duty to take care of their well-being, however only the third is yours in the full sense of the word. Thus, if you separate from yourself, that is, from your thinking, all that the rest of the people do or say, or all that you yourself have done or said, and all your worries for the future; and all that clung to you out of necessity due to the needs of the body surrounding you or the needs of the soul of your life; if you discard the outer vortex that sweeps away all that surrounds us on all sides, so that the virtue of your wisdom, free from all necessity, will stand in its purity and live like a free woman on its own, do justice, willingly accept everything that happens to it and tell the truth; (P. 174)

A saying that summarizes the extrinsic, the surplus that sticks to us, they must be examined, if they are right for us, and if we want to follow them or find that they need to be changed – here is the importance of refreshing ourselves through constant examination.

The second central point in the above statement – how man can claim his freedom, the freedom of his reason actually. This topic is emphasized from another angle in the following statement. Self-judgment may not only bring with it freedom for man, but also calmness and serenity. The use of this tool, which Aurelius calls reason, is significant in almost every step of our lives. Stopping and making use not of what is desired but rather the best of what is available under the circumstances, this is an insight that can sustain each of us.

(22) Everything is according to your judgment, and that judgment is under your control. Therefore, take hold, whenever you want, of judgment and your arrival shall be peaceful – Be like the cliff against which the waves continually break; but it stands firm and tames the fury of the water around it. (P. 178)

(6) There is a person, who whenever he does good to others, is right to record this grace to his credit in his book of accounts. Another, while he is not right to do so, but in the depths of his soul sees himself as a debtor and knows what he has done. There are even those who in a sense are unaware of what they have done, but are like a garden that bears a bunch of grapes and asks for nothing for itself, other than having ever borne its own fruits. (P. 68)

If we put a mirror in front of our eyes, we can quietly hand out scores for our behavior. Self-judgment only for ourselves, with the requisite modesty, is our gift to ourselves.

The following statement, about “the beautiful,” places us as it were in the Archimedean point, such that every statement that comes out of us must be made for our own investigation. This statement is wonderful in my eyes, since everything is based on it! It demands examination.

(20) Everything in any way beautiful has its beauty of itself, inherent and self-sufficient: praise is no part of it. At any rate, praise does not make anything better or worse. This applies even to the popular conception of beauty, as in material things or works of art. So does the truly beautiful need anything beyond itself? No more than law, no more than truth, no more than kindness or integrity. Which of these things derives its beauty from praise, or withers under criticism? Does an emerald lose its quality if it is not praised? And what of gold, ivory, purple, a lyre, a dagger, a flower, a bush?

Admit, dear readers, how great the wisdom of Marcus Aurelius is, and the importance of this book, Thoughts To Myself, that has come down to us, and in such an accessible translation. I recommend placing it near one’s reading chair or on a bedside table to peruse whenever the mind or desire chooses.

The ideal stoic sage understands that everything which happens occurs under the supervision of divine reason and therefore he must accept it and live according to nature; this is the only good value.”